These transistors are electronic components ideal for switching circuits and can also be used as an amplifier.

The transistor is a circuit element that can be used as an electrically operated switch. It is made of semiconductor materials, has three terminals and can interrupt or close the circuit between two terminals depending on the command applied to the control pin.

There are two common types of transistors: bipolar and field-effect

The picture shows the symbol bipolar transistor (left) and an illustration of a universal transistor (right). There are two types of transistors: NPN and PNP (depending on the type of semiconductor material). Its terminals are: B - Base C - Collector E - Emitor 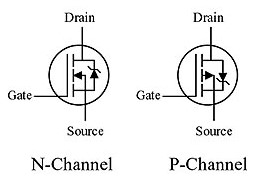 The base will be used to control the transistor. Initially, this will not stream (between C and E). If the voltage base-emitter opening exceeds a threshold (about 0.65 V), it will absorb the current through the base and it will let through (almost) freely between C and E.
The image shows the symbols equivalent field effect transistor (FET - Field Effect Transistor). They work in the same way with one exception: they do not absorb energy when they are constantly open (as opposed to bipolar transistor). Switches faster, but their disadvantage is the fact that the command requires a higher voltage applied to the gate (Gate) - 1.8 ~ 10V